Sometimes a single object can tell a very complex story about the times in which it was created. And this is the case with the al-Mughira pyxis, from the ivory workshops of Cordoba, and now held in the Louvre.

The Cordoba ivory workshops were renowned for the exquisite beauty of the objects they created. Understanding the iconography carved on the caskets is a fascinating study in itself. But this particular casket can be re-interpreted to expose a complex story of violence and intrigue from the court of the Cordoba Caliphate – a story that almost beggars belief. 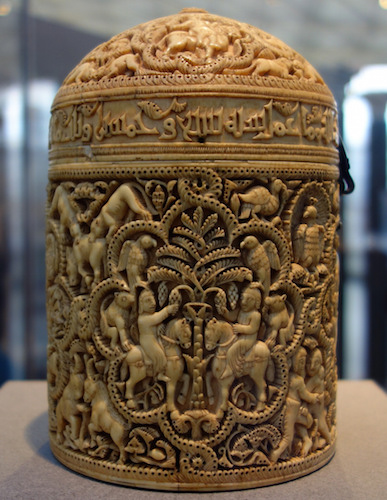 The story will be unravelled by speaker Ian Cockburn at a lecture for The Arts Society Benahavis at 7 pm on Tuesday 29 October.

Ian is an art historian with an MA from the prestigious Courtald Institute. He specialises in the 800 years of Moorish occupation of Spain and in the Reconquest. He is also the founder of an arts tours company in Spain and in London lectures at the V and A and Christies.

Due to Covid 19 restrictions the lecture will be delivered by zoom. Visitors are welcome to join the audience for a fee of ten Euros by contacting Grace on (graciesvilla@gmail.com)

Where: The Arts Society Benahavis

When: Starts at 7pm

More about the Carved Ivories in Al-Andalus (Islamic Spain)

Al-Andalus, the lands on the Iberian Peninsula (today, Spain), which were controlled by Muslims from 711 to 1492, are home to some of the most remarkable monuments of Islamic art. These include the Great Mosque of Cordoba, constructed by successive Umayyad Caliphs, and the Alhambra Palace, built by the final Islamic dynasty that controlled Al-Andalus, the Nasrids.

As stunning and impressive as the architecture of Al-Andalus was, the luxury arts, specifically the exquisite textiles and intricately carved ivory artefacts, produced in in royal workshops, also flourished. One of the best examples of this tradition is the Pyxis of al-Mughira.
Since the twilight years of the Roman Empire, carved ivory objects had been important elements of the artistic canon of the Mediterranean.

Ivory was durable, smooth, elegant, and easily carved, making it highly desirable for the creation of diptychs, pyxides (the plural of pyxis), and icons that could serve as single panels or could combined into diptychs or triptychs during the Byzantine Empire. Highly portable, they were often given as gifts.

Although ivory carving was practiced in Constantinople, Syria and Egypt, it was a new arrival in Al-Andalus, and there are no examples of ivory carved caskets before the reign of the Umayyad caliph, ‘Abd al-Rahman III (r. 929-61).