Christmas on the Costa del Sol is a magical experience and the perfect time of year to enjoy the many displays of lights, fiestas and Christmas markets situated throughout the coast. It’s also a great time of year to enjoy the sunshine, thanks to the unique micro climate the coast enjoys all year round. Believe it or not, you will love going shopping with the family in tow, while taking in all the delights of the usual activities found throughout the small villages and communities.

Christmas on the Costa del Sol is the perfect time to find gifts for people you love. After a shopping spree to the sound of Christmas carols, treat yourself to a cup of hot chocolate with churros in a traditional café. Or enjoy the many displays of lights. We’ve put together an impressive list of all the best activities and where to enjoy them.

Malaga City is by far the most popular place for Christmas on the Costa del Sol. The Christmas lights alone have their very own event.

In past events Malaga City has used up to 600,000 led lights on Larios street, which is the most centric street in Malaga. Malaga is by far the best place to enjoy the Christmas lighting in the world.

And there’s plenty more to see in Malaga! Besides the light show, you can take a look at more than 20 Nativity scenes, and the one in the Town Hall, has more than 300 figurines, which is absolutely amazing. 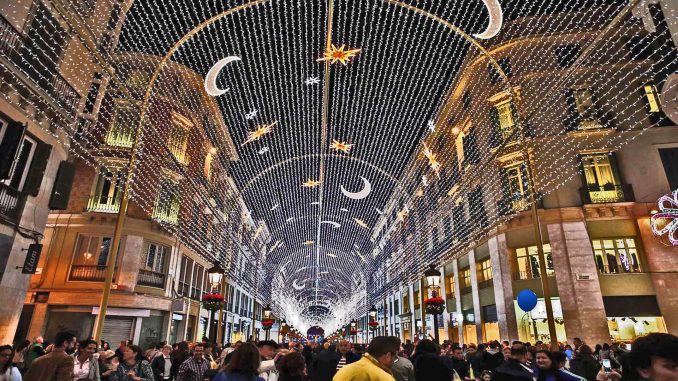 In Malaga City at Christmas you can also check out the Christmas Zone outside El Cort Ingles – The popular department store has created a wonderful zone outside the shop which includes a carousel, snow city, ice rink, Christmas train, toboggan ride and an adventure circuit.

Another fabulous event is the Malaga Children’s Fair – From the 26th of December to the 4th of January families can head to Malaga’s conference centre for a very special event including more than 60 fun activities for kids from 2 and 12 years old. Activities include rides, ice skating, mini golf, rock climbing, sip line, arts and crafts, bouncy castles, story time, theatre and much, much more. Kids between 4 and 12 years old pay 8€ for the day, adults pay 4€ and under 3s are free. Buy your tickets online for discounts.

Enjoy some music – There are free concerts every evening in Plaza de la Constitucion between 7pm and 10pm and there’s a wonderful Christmas concert at the Malaga Cathedral on the 20th of December at 8pm.

Mijas is the perfect place for a Christmas getaway, with the large and busy town of Fuengirola, the pretty village of Mijas Pueblo and the seaside town of La Cala on Mijas Costa, with its excellent beaches and famous market. 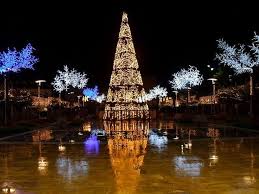 Mijas Pueblo – The white village of Mijas Pueblo is a popular hot spot for tourists and locals a like. All year round this white village looks pretty as a picture, but looks really beautiful at Christmas. Mijas has lots of Christmas activities planned, such as a puppet show on the 13th of December, Christmas Market on the 15th of December, Choir Contest on the 17th and theatre and storytelling throughout the month.

Marbella Centre – The port side city of Marbella is beautiful over the Christmas period, with the best lights and activities around the popular Old Town. Marbella has lots going on around Christmas, but make sure to tour the nativity scenes, or sit in one of the beautiful squares for a drink and enjoy the atmosphere while picking up some last-minute Christmas gifts.

You will find lots of lovely free events around Marbella, San Pedro and Nueva Andalucia such as a Children’s Christmas afternoon in Marbella’s Old Town, with workshops, a living nativity scene on the Paseo de la Alameda and there’s many more events.

There are lots of chances to enjoy festive music such as a Christmas carol contest on December 15th in the Plaza de Iglesia in the Old Town.

Christmas in San Pedro – San Pedro may be a small little village town by the sea, but that doesn’t stop it from going big at Christmas time! In San Pedro at Christmas you can enjoy its very own light show as well as,

One very popular attraction in San Pedro during the holiday season is the giant bauble on Calle Marqués del Duero. The bauble measures 12 metres in diameter and has 70,000 light bulbs.

Estepona is your typical Spanish town, with a traditional vibe and a welcoming Old Town. Here, you will find the typically Spanish white washed buildings, pretty plazas and pedestrianised streets. All of which, make for a very special Christmas atmosphere that you will love.

The best things to see and visit in Estepona at Christmas are the ice rink and Christmas fun fair. There’s a lovely Christmas village on Avenida Juan Carlos 1 between 11 am and 10pm every day until the 7th of January which is perfect for families to get into the festive mood. 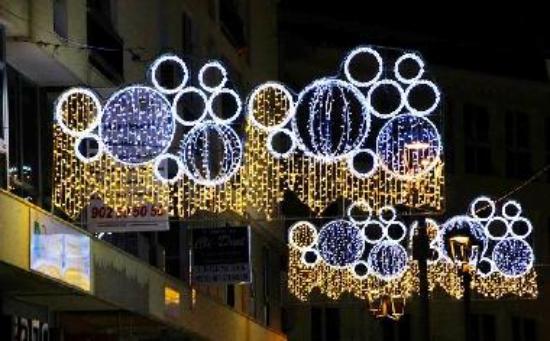 Enjoy music at one of the concerts and performances taking place over the Christmas period. There is a big Christmas Concert on the 16th of December at the Auditoria Felipe VI at 8pm, a concert by the local schools on the 19th at the Palacio de Congresos, a performance at the Santa Maria church on the 20th and many more throughout the Christmas period.

Ronda is best known for its spectacular setting atop a deep gorge spanned by a stone bridge, Ronda has a rich cultural and literary tradition, and is the home of modern bullfighting. Ronda retains much of its historic charm, particularly its old town. Between the 22nd of December and the 6th of January there is a little Christmas village in the Alameda del Tajo with an ice rink, bouncy castles, face painting and more from 4.30pm to 8.30pm.

As you can well imagine, there is a special taste to Christmas on the Costa del Sol. Like mantecados (butter cookies), pestiños (olive oil pastries), Ronda yolks, polvorones (almond cookies) from Antequera. In Torremolinos there is an exhibition of convent sweets gathering the delicacies baked by nuns across Málaga Province.

You will find other culinary delights are present in all Christmas and New Year’s Eve dinners. Hotels, restaurants and nightclubs on the Costa del Sol through New Year’s parties that go on till the wee hours.

Three Kings Day, or Dia de los Reyes in Spanish, falls on January 6 every year. It’s the day that most children in Spain and other Spanish-speaking countries receive their Christmas presents. Just like other children from around the world eagerly await Santa Claus on Christmas Eve.

In Spain ‘Los Reyes Magos’ – Melchior, Caspar and Balthazar – play a similar role to Santa Claus. Spanish children write letters to the Three Kings, or Three Wise Men, who then bring the children gifts the night before, or on the morning of the Epiphany, January 6th.

In some Spanish houses, children will leave their shoes outside the door so that the Three Kings will fill them with gifts, often leaving bigger presents alongside. 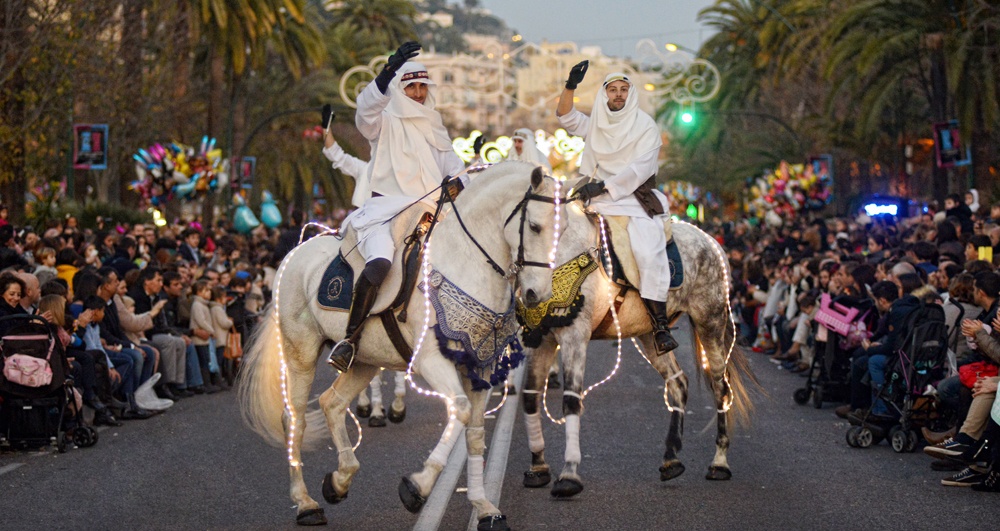 Huge Three Kings parades or ‘cabalgatas’ are held around Spain on January 5th. They are huge spectacles featuring hundreds of actors and are broadcast live on Spanish television.

On 5 January, the Three Wise Men land on the Costa del Sol, where they parade down the streets handing out sweets and hope. Melchior, Caspar and Balthazar meet children in most villages in Málaga Province before leaving their gifts in their homes.

It is ingrained into our consciousness, and it’s the pride of an entire nation. It is passion, in just one word, completely sublime in temperament with raw sexual energy, in the simplest of descriptions. The […]