To say I was delighted once again, to visit my favourite restaurant Conrad’s Il Ristorante, was an understatement.  It is without a doubt at the top of the list for every lover of fine food and wines, wishing for a memorable lunch or dinner at the most reasonable cost.

Run by Sabine and her husband Renee Conrad, a Michelin Star chef and previous owners of the hugely popular Il Ristorante in La Campana, Nueva Andalucia, the restaurant has now been running successfully for over two years. It goes without saying that one needs to book to secure a table at least three days in advance.

We promptly arrived at 2pm and were warmly greeted by Sabine and shown to our table situated on the outside terrace.  In no time one of the waiters swiftly arrived to ask what we would like to drink.  We ordered their fine house white wine; Camino Verdejo, priced at a remarkable 10 Euros per bottle.

It was now time to choose our lunch from the two menus.  We were astonished at the a la Carte and the Menu del Diá, both priced at €15 Euros for 3 courses, with  sapient additional supplements of maximum 5 Euros on some of the more expensive selections.

We opted for the A la Carte. For the first course, and chose the Carpaccio Classico,  being melon with Iberian ham which without embellishment, was the best I have ever had.  This ham was very finely cut with the perfect amount of fat content, which is so important in this region of Spain, whereas in many restaurants it is tough, dry and unpalatable. It was also so refreshing that the starters were small portions to whet the appetite for the other courses.   The carpaccio was fabulous, it was said to me.   The meat was very delicate and sweet, which is the way I like.  The olive oil was one of the finest on the market, which they drizzled over the meat and added further moisture of the dish. 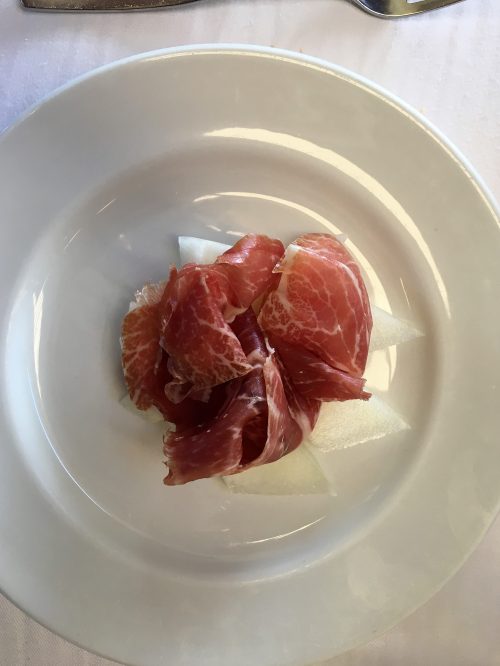 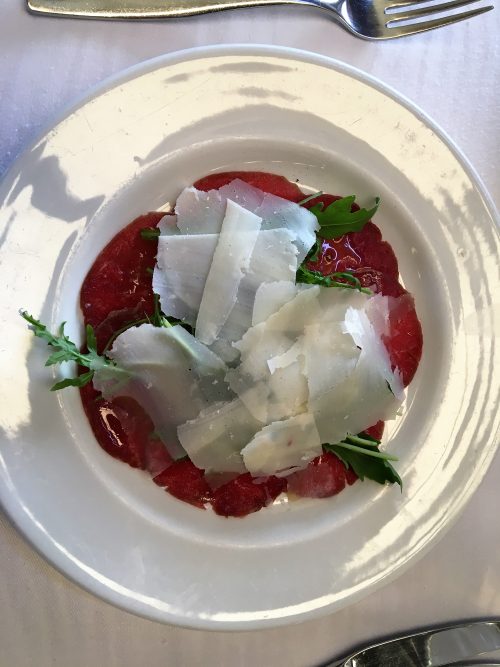 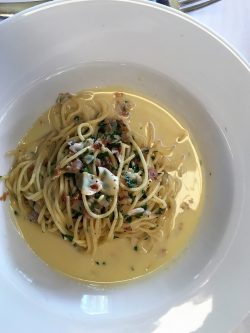 We were all impressed by the service at Conrad’s Il Ristorante. The waiters had been very discreetly and attentively keeping an eye on us and were on hand to deliver the ensuing courses with efficiency and precision. We both felt that there was most certainly a valid application for a Michelin star in the offering for the service, menu selections and the comprehensive and well-thought through wine list. We just hope they don’t increase their prices

Now it was time for our main courses and I chose one of my all-time favourites; Spaghetti carbonara.  I like to think that i am an expert on this traditional Italian signature dish.  It was without question incomparable to any other I have had in Spain, it was quite simply outstanding and delicious.  Smothered in garlic, finely chopped ham, a creamy herb-infused sauce with and light home-made spaghetti, again the portions were not too large and unlike many carbonara’s which are heavy with thick spaghetti and sauce and far too rich. My guest ordered the ravioli with ricotta cheese and spinach, with flakes of parmesan in a delicate creamy sauce; her verdict, “absolutely delicious and beautifully presented like the rest of the dishes we have had so far”.

Last but not least, the naughty puddings. my guest chose the Mousse au chocolat.  “The Mousse au chocolat’ was absolutely heaven”, It was said to me.  “It was light, the chocolate high grade quality with fresh cream on the top and elegantly presented.  Everyone wants a little bit of sweetness at the end of a fabulous lunch like this. I had the cheesecake with strawberry ice cream”.  I have to say with many cheesecakes they are very heavy and far too rich.  This was as light as feather. A perfect way to end a perfect lunch. 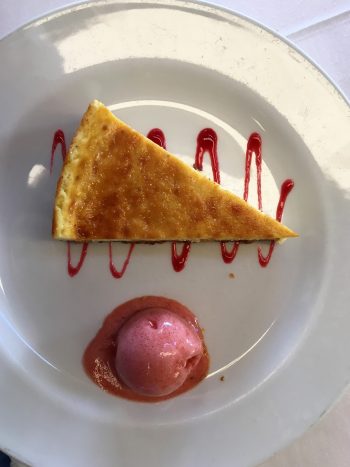 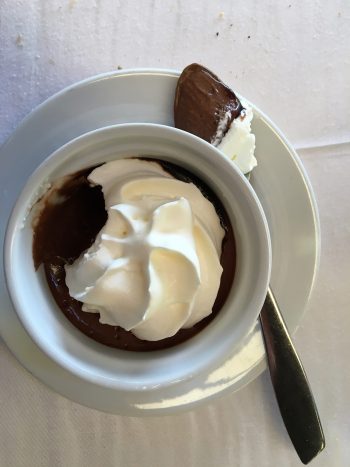 On a final note, what is the mission statement of Conrad’s Il Ristorante?

“We are the best Italian Mediterranean place on the whole of the Costa del Sol and simply want to make our clients happy with fresh produce and fantastic service”, said Sabine.

Having spent a quite heavenly afternoon and unashamedly were the last guests to leave – we could not tear ourselves away, we thoroughly endorse that they are indeed the best and ultimate Italian Mediterranean restaurant on the Coast.  A huge thank you to Sabine, Renee and the staff who attended us, namely Esther, Hamed and Roid.  Long may Conrad’s reign as the jewel in the crown for gastronomy here on the coast. 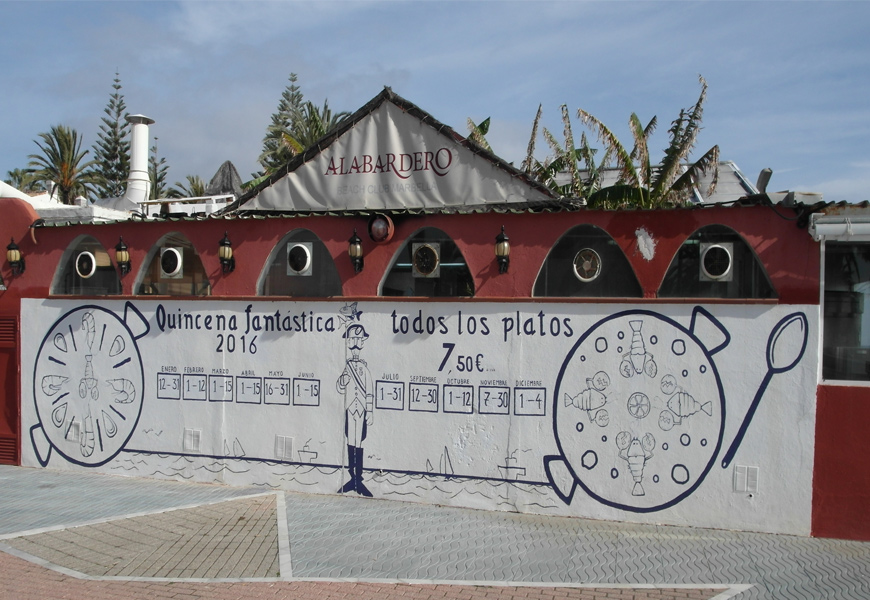