LOOK ABOVE: A new art museum like no other is about to open to the public in Spain. It’s at the bottom of the Atlantic Ocean, under the waves off Lanzarote, in the Canary Islands, and features 400 pieces of artwork. As Jeff Semple reports, it’s underlying political messages are definitely not watered down.

Europe’s first underwater museum has officially opened to the public on the ocean bed, off the Canary Island of Lanzarote, in Spain.

Some 200 life-size human figures, created over the course of two years by British sculptor Jason deCaires Taylor, have been submerged 14 metres under the Atlantic Ocean.

The sculptures, some modelled after local residents, are made from environmentally friendly and pH-neutral materials and will attract plant and animal life, just like artificial reefs.

WATCH: Go below the surface to see how the Atlantic Museum of Lanzarote was created

According to a statement released by the Atlantic Museum of Lanzarote (Museo Atlantico de Lanzarote), the first part of the project, installed in February 2016, have already being frequented by angel sharks, barracuda, sardines, octopus, and more.

The artworks also include a 100-tonne, 30-metre long wall and a botanic garden.

The exhibition also features an installation called the Raft of Lampedusa, a sculpted boat carrying 13 refugees, which pays tribute to the ordeal of refugees who crossed the ocean during the recent migrant crisis. 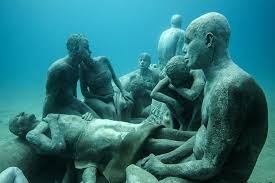 According to the artist, the exhibition “aims to create a strong visual dialogue between art and nature”.

The Atlantic Museum is the latest work by artist deCaires Taylor, whose other underwater exhibitions are located in Mexico, the Bahamas and Grenada.

Funded by the local government, the museum officially opened to the public on January 10, and is accessible to scuba divers and snorkelers.