What began more than a century ago as one man’s passion for all things Spanish, has become the world’s largest collection of Hispanic art outside Spain — and now part of it is going on display in the country for the first time.

The exhibit opens with a portrait of the collector himself, painted in the 1920s when he was in his 50s, wearing a thin moustache and reserved air that belied an obsession nourished since childhood for the literature and art of Spain and its imperial lands.

The masterpieces on display range from paintings by Goya, Velazquez and Murillo, some restored by the Prado ahead of the show, to a “Pieta” by El Greco.

One unique item harkens back to Spain’s powerful empire days of global exploration: a map of the world made in Sevilla by Giovanni Vespucci — nephew to explorer Amerigo Vespucci — in 1526.

Rich in detail, including a Tower of Babel in the Middle East to Spanish sailing ships on the seas, the document was used by the explorers heading across the Atlantic to the New World. 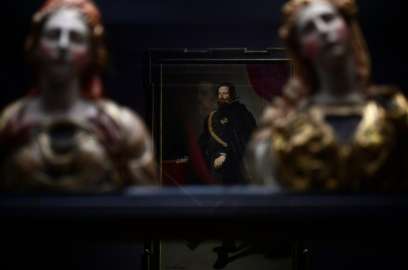 The painting of Diego Velazquez, “Gaspar de Guzman” is among 200 works from the Hispanic Society of America

“It’s the first time such a sample of the collection is being displayed in Spain and even outside HSA. Several pieces have never before left the New York headquarters,” HSA curator Mitchell Codding told a press briefing of the show.

The exhibition “tells us about Huntington’s personality — his passion for Spain, its culture and language — and what it tells us about ourselves,” said Spaniard Miguel Falomir, the new director of the Prado.

Huntington, a child of privilege born in 1870, travelled to Europe for the first time when he was 12, accompanying his mother, herself a collector, to museums.

A trip to Mexico in 1889, and a subsequent trip to Spain in 1892, helped kindle the young New Yorker’s lifelong passion for their arts.

At the age of 30 Huntingon inherited a fortune from his father who had built ships and railroads. He used it to carry out his goal of building a museum of Hispanic culture, which opened to the public in Manhattan in 1908. He died in 1955.

Unusually for his era, Huntington appreciated the rich Islamic heritage of Spain, and even learned Arabic, Falomir said. A highly rare example of this interest is a luxurious silk from the Alhambra palace in Granada dating to around 1400.

But his collection also features masterful religious works made at the height of Spain’s imperial power, including a 15h-century wooden saint’s statue.

The exhibition, which runs through September 10 at the Prado, is also expected to go on tour in the United States.