On advice from dear friends of mine, John and Christine Lord, who highly recommended this restaurant to me following a dinner they had the night before. I thought why not, it has been far too long since I have had a sumptuous Indian feast and I have to say in advance, I was certainly not disappointed.

‘Indian Flavour’ is centrally located in the heart of San Pedro, just a stone’s throw from the BP Petrol Station, near the San Pedro roundabout and perfect if you wish to have a bite to eat having visited the San Pedro market.

On arrival, we (my flat mate Alex and I) were warmly greeted by the ebullient co-owner fondly known by his nickname Rasal – his full name being Salman Chowdhury. On having spent only a few minutes in his company, I came to the conclusion he makes it his life’s mission to instill happiness in his customers. This is abundantly clear from the moment you set foot in his restaurant to the moment they depart. 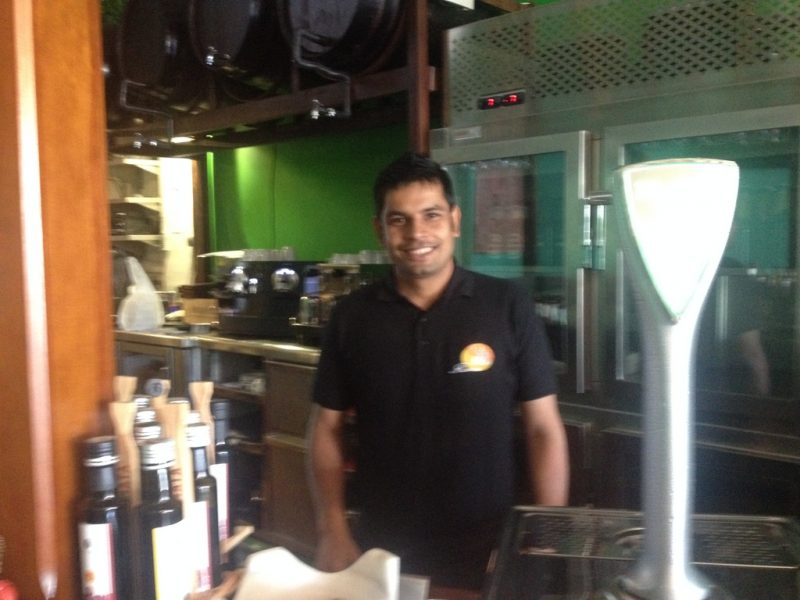 As it was a beautiful sunny day, we were swiftly guided to our table outside and within a matter of minutes we were served with a bottle of the ‘superb fine house wine’– Montes Pina Verdejo 2014 Rueda.  On queue a complimentary plate of poppadum’s served with chutney, lime sauce and an assortment of cucumber, onions and chilies arrived to whet our appetites. The authentic ambience, together with the smells emerging from the kitchen of traditional Indian spices, set the stage for a culinary experience.

Whilst bathing in the sunshine, having made our orders from the comprehensive menu, which boasts a staggering 111 menu choices with the prices of main courses ranging from €7.95 to €19.95, the latter being for two people to share, I had a chance to glean the background to opening his latest Indian establishment on the coast.

My first question was “When did you open and what is the concept of ‘Indian Flavour’ that sets you apart from the multitude of other Indian Restaurants here”?  He replied, “We opened on the 1st February this year and we pay ultimate attention to detail serving the ultimate Indian feast for our clients with unbeatable service. As you will see we have a comprehensive menu, which caters to the many tastes of Indian cuisine from The Punjab, Rajasthan, Goa to Kerela, all different in their many flavours.

The interior reflects the culture of the Indian people, the religion and the history, with traditional Indian colour schemes, paintings and golden Buddha’s the theme is truly Indian in the midst of The Costa del Sol. 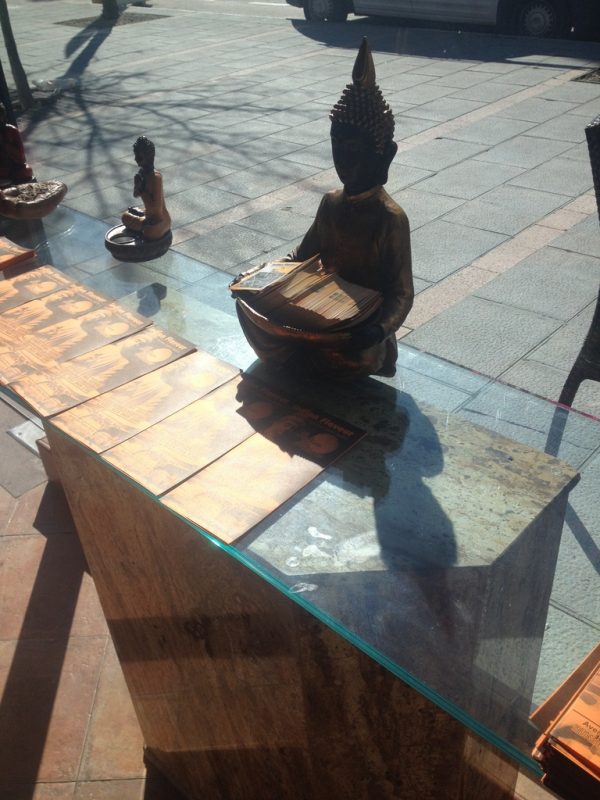 “What is your background”?  “I worked for five years in a restaurant in Madrid and then came to Marbella in 2013 where I opened the first ‘Indian Flavour’ Restaurant in Alhaurin El Grande.  That was so successful that we decided to open another restaurant here.  With the long term forecast my business partner Raju Barua and myself want to franchise ‘Indian Flavour’ across Spain, opening up to 10 new restaurants in the next five years.  Everywhere you visit you will be able to enjoy ‘Indian Flavour’ with all different types of Indian food to suit the palates of the Spanish, English and all of the other nationalities that have settled or visit Spain.  We are an Indian restaurant that caters for all Indian food lovers”.

“Our location is charming, at night the restaurant is candlelit with soothing Indian music setting a romantic mood for the clientele.  It is important for us that our customers have a wonderful time, therefore our attention to detail, the quality of the food and promptness of service is all important.

We have a projector screen inside and a flat screen television outside for those who love sport and we do want to attract regular customers who will join us on the weekends for the big matches.  We televise everything from cricket (of course), premier and Spanish league football, horse-racing etc. “The USP (Unique Selling Point) is that the Expats can feel at home here, have great Indian food, a few beers and watch their favourite sports”. 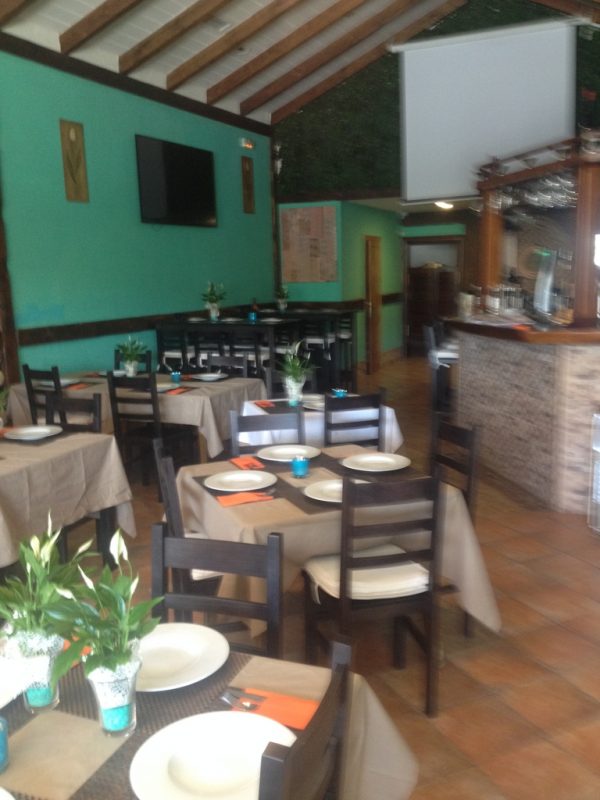 Now it was time for our feast to begin cooked by their chef Abu Daher.  We started with the Prawn Puri (he imports his prawns from India!) which was pleasantly spicy on fried bread with melt-in-the-mouth garlic Nan bread.  Other starters included meat and vegetable samosas, chicken chat, salads, assorted vegetables, onion bhaji, lentil soup and chicken pakora amongst many others.  The list is endless and all reasonably priced from €2.95 to an assorted non vegetable starter to share (Chicken Tikka & Tandoori, Seekh Kabab, and Chicken Pakora & Meat Samosa) for only €10.95.  Customers can also have the choice of a Menu del Dia at €10.95.

Next we had the Chicken Jalfrezi cooked with sliced onions, green & red peppers tomatoes & spices with pilau rice.  “This Chicken Jalfrezi was exceptionally succulent, the sauce, spicy and the ingredients complimenting each other perfectly. 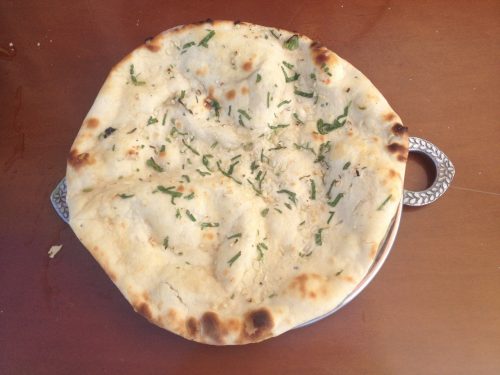 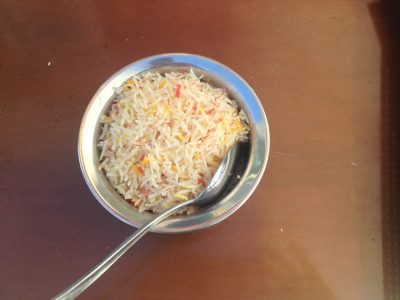 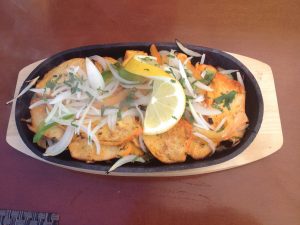 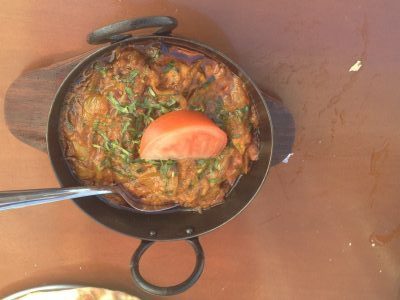 This was followed by one of many Indian restaurants most popular dishes; their traditional chicken tandoori.  Beautifully presented and sizzling hot with onions, tomatoes, chilies and green peppers with a lemon on top.   “The tandoori chicken was succulent and for those who are not great lovers of spicy sauce – a perfect main course”.  It was now time for our second bottle of wine. This time we chose a dry white wine which comes from Condado de Huelva and tasted like a white burgundy.  It was very French in taste rather than Spanish and only 11% alcohol.  I have obviously been living in Spain too long as I actually preferred the first one!”  I have been to some of the best Indian restaurants in the world and I can certainly rate this as being on a par with most of them

At ‘Indian Flavour’, Rasal undeniably gives personal service not only for his in-house diners, but as we were about to leave we suddenly saw him running out with a takeaway for a customer who was at the gym! The final words from Alexander Figg following our superb lunch. “Top class”.  I could not have put it better myself!