Tony Siqi Yun was born in Toronto, Canada in 2001. He began his piano studies at the age of four. He entered the prestigous middle school affiliated to the Central Conservatory of Music in Beijing in 2011, and is currently studying at the Juilliard Pre­College Division, under Professor Matti Raekallio.
Tony has performed in many music festivals and concerts as a soloist. He performed in the 60th Anniversary of Wuhan Conservatory in China in 2013. In 2014, he attended the International Piano Festival sponsored by Sichuan Conservatory and performed as a soloist at the closing ceremony. Tony was invited to perform in the Amalfi Coast Music & Arts Festival in Italy and was selected among the young artists to perform at the event.

Tony has toured extensively with the China Philharmonic Orchestra, one of the youngest to have done so. His repertoire has included the Mozart Piano Concerto No. 20 and the Chopin e minor Piano Concerto, which he performed with the orchestra in The Forbidden City Concert Hall, Beijing, to critical acclaim. His performances was recognised by the Polish delegation in attendance, and by the Chairman of the Beethoven Association of Poland. He has performed on China´s national TV station, CCTV, on numerous occasions, with a special invite for the Silk Road New Year´s Convert on December 30th, 2014.

Tony was honourably invited by Professor Marian Rybicki to perform at the renowned Salle Cortot Concert Hall in Paris in February 2015.

Debbie, based on the Costa del Sol specialises in painting Manolo Blahnik & Christian Louboutin Stilettos, seascapes, wine, food, golf and various other subjects in a contemporary and vibrant style.

Debbie also offers an art consultation service and bespoke and personalised art works designed for your home and corporate environment. Her work is guaranteed to enhance all interiors.

Welcome drink on arrival, Drinks and Canapés on the Terrace during the interval 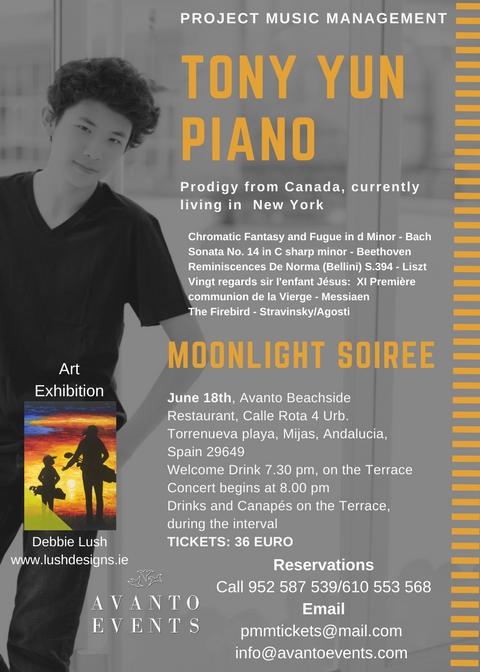