The economy is finally set to return to its pre-crisis level. But have the reforms come at too high a price?

As you leave Valencia’s old town and head east towards the port, you come face to face with two decades of Spanish economic history frozen in concrete, steel and glass.
First come the gleaming spikes and waves of the City of Arts and Sciences, a €1.3bn complex that includes an opera house, museum and Europe’s largest oceanographic aquarium. Built at the height of Spain’s property boom, the project symbolises the reckless ambition of the time. Vastly exceeding its €300m projected cost, it blew a hole in the regional budget that haunts Valencia to this day.

Next up is the Formula One racetrack, built during the same period, but abandoned after just five races. It runs past another relic of Valencia’s great sporting ambitions: a string of buildings that housed the America’s Cup regatta in 2007 and 2010. Despite their enviable location overlooking the yacht harbour, most fell into disuse once the event was over. Now, at last, there are signs of life: one building houses a business school. Another serves as a gastronomic centre.

Boom and bust, recession and recovery — Valencia embodies the recent story of Spain like no other place. When times were good, this was the city that borrowed more rashly, built more lavishly, and invested more foolishly, than any other. When the property bubble burst, Valencia fell hard.

“The entire economy was built on bricks and mortar,” recalls Mónica Oltra, an opposition leader during the boom years, and now vice-president of the Valencia regional government. “It was like being at a party of drunks . . . People thought it would never end.”

Today, the hangover from that party is receding — both in Valencia and the rest of the country. After three years of impressive economic growth, Spain is about to pass a crucial milestone on the road to recovery: according to official calculations, the country will exceed its pre-crisis level of gross domestic product any day now. Nine years after Spain slid into a long and bitter recession, the country is back where it was in 2008. 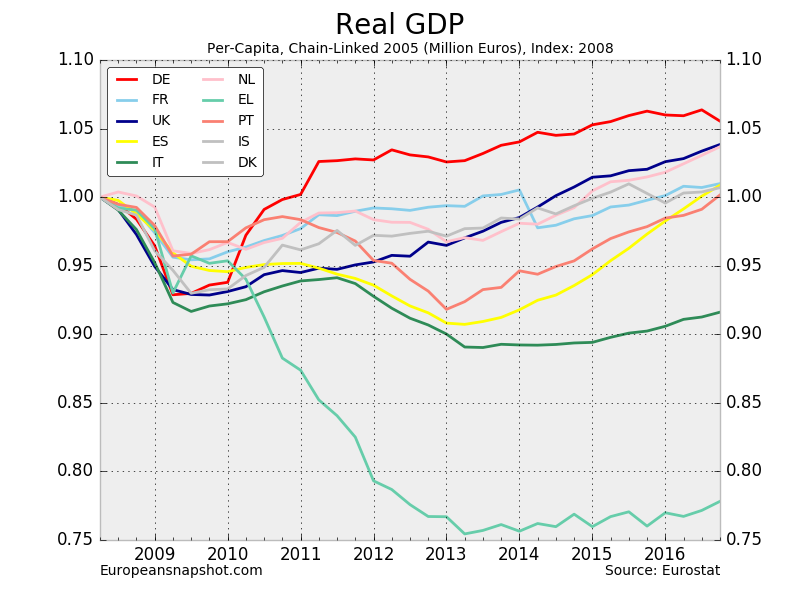 For some, not least the Spanish government and Europe’s political establishment, this is a moment of relief and vindication. In their view, the recovery of the eurozone’s fourth-largest economy shows that the unpopular policies pushed through at the height of the crisis worked. Despite causing initial pain, Spain’s decision to reform the labour market, overhaul the banking system and cut the deficit paved the way for a return to growth. It is a message Madrid would like to resonate beyond Spain’s borders: countries can reform their way out of an economic crisis, even while being locked into the single currency.

There is, however, another view. Critics, mainly from the left but also from parts of academia, argue that the country’s recovery is not just incomplete but that the price of austerity and reform was too high. The unemployment rate may have fallen sharply, but at 18.6 per cent it remains far above the pre-crisis level and almost double the eurozone average. Ms Oltra is one of many who bemoans the creation of a new class of “working poor” in Spain. Inequality has increased dramatically and public finances continue to bear the scars of the crisis: Spanish government debt is 100 per cent of GDP, up from 40 per cent before the crisis.

The lost decade, and debt accumulated along the way, will weigh heavily on Valencia as well. Almost a quarter of the government’s annual €4bn budget is used to service the region’s vast debt pile. “We are paying for a lot of broken plates,” says Vicent Soler, the regional budget minister since 2015.

Amid the debris of the downturn, however, some sense that the outlines of a new economic model for Spain are beginning to move into view. Analysts caution that crucial vulnerabilities remain — from the low productivity of Spain’s private sector to the still-towering unemployment rate and the poor state of the country’s education system.

There are also lingering concerns about the health of the eurozone, which Madrid feels needs further reforms and more aggressive instruments to help deal with future crises. But a deeper look at the origins and causes of the post-2007 downturn suggests that Spain has tackled some of the country’s old weaknesses. The once decrepit banking system is on a sound footing, companies have become more competitive and the over-reliance on construction is gone.

“It’s too early to declare victory,” says Javier Andrés, a professor of economy at Valencia University. “[But] Spain is growing again, and it is creating jobs. It has shown that it can change.

” The origins of the crisis are today broadly understood: when Spain joined the European single currency in 1999, it seemed like the gates to economic heaven had opened. A country with a history of high inflation and high interest rates was suddenly able to borrow at dramatically reduced rates. The arrival of the euro sparked a credit and property boom that neither the European Central Bank nor the Spanish government were able, or willing, to stop.

That boom coincided with the arrival of millions of migrants from Latin America, eastern Europe and north Africa, fuelling demand for homes that eventually reached fantastical proportions. In 2007, Spain accounted for more housing starts than Germany, France, Britain and Italy combined and 2.7m Spanish workers were active in the construction sector — equivalent to 13 per cent of the national workforce.

In Valencia, the boom was even more pronounced, helped by two factors that had nothing to do with central bankers in Frankfurt. One was the decision by the regional and local government to sink billions of euros into one-off events and pharaonic architectural designs. The other was the proximity between political leaders and the cajas, or regional savings banks, under their control. Poorly run and poorly supervised, the cajas provided the rocket fuel for Spain’s housing boom, dutifully funding one unviable project after another. Despite swallowing more than €17bn in public rescue aid, not one of the three main cajas from the region of Valencia survived the crash. 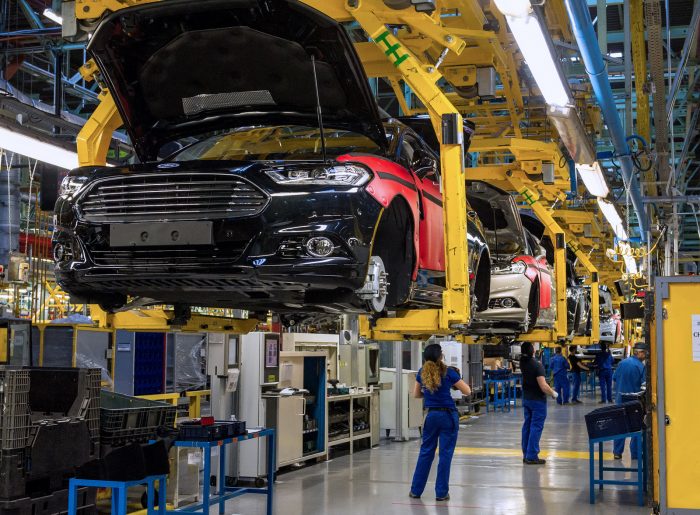 There was nothing that Valencia, or Madrid, could do about the low interest rates. But the combination of mismanagement, hubris and greed, coupled with a banking system that lent according to political not financial criteria, proved disastrous. As the bubble continued to inflate, it touched on the lives of more and more people: teenagers left school without any qualifications to work on building sites. Orange farmers pulled up their groves to build apartment blocks. Owners of family companies abandoned them to sell real estate. A region that once prided itself on its manufacturing industry succumbed to the dream of dinero fácil or easy money.

Today, growth rates are nearly back to levels during the boom years. The Spanish economy expanded by more than 3 per cent in both 2015 and 2016, far ahead of its European peers. That is expected to continue this year, with GDP forecast to rise at least 2.5 per cent.

More important than the headline figure, however, is the composition of Spanish output. In the years before the crisis, the volatile construction sector accounted for more than 10 per cent of GDP. Today, that share has fallen to 5 per cent. At the same time, Spanish exports of goods and services have risen from 25 per cent of GDP to 33 per cent. The country’s exports are also more diversified, with more companies in more sectors selling to more markets.

The export boom reflects, among other things, the country’s recent competitiveness gains. Spanish unit labour costs have fallen 14 per cent since 2010, in response to long years of wage restraint as well as the new flexibility granted to companies by the 2012 labour market reform. The vast Ford plant outside Valencia is one of several car factories that have added jobs and production lines since the recession.

Another important sign of progress shows up in the current account, the measure of a country’s trade position with the rest of the world. In the boom years, Spain ran annual current account deficits of as much as 10 per cent of GDP — a level economists regard as a sign of acute vulnerability. Today, the numbers tell a different story. 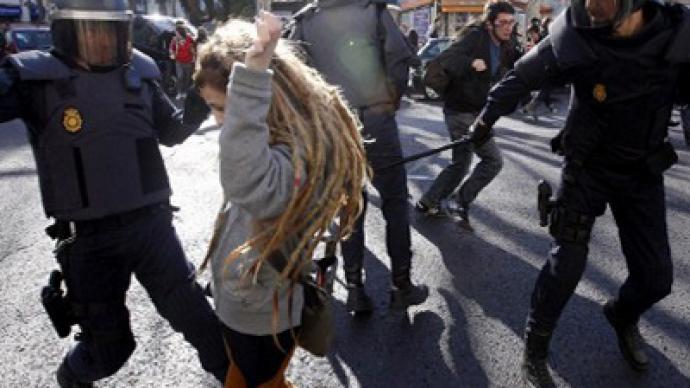 “For the first time in recent history, we have a recovery that is not associated with a deficit in the current account. The economy has been growing strongly for more than two years and still we have a significant surplus,” says Raymond Torres, chief economist at Funcas, Spain’s savings banks foundation.

Possibly the most important break with the past has come in banking. Messy and costly as it seemed at the time, Spain’s 2012 banking bailout and recapitalisation package turned out to be vital for the country’s recovery.

“Spain did a textbook bank rescue,” says Angel Ubide, a managing director at Goldman Sachs and until recently a senior fellow at the Peterson Institute for International Economics. “It shut down the banks that couldn’t survive and recapitalised the ones that could. And then it moved all the bad assets into a bad bank.”

The overhaul killed off the cajas, which were either folded into larger private banks or forced to become normal lenders, free from political influence. But it also meant that markets regained trust in the broader banking system relatively quickly. Balance sheets were cleaned up, bad loan ratios fell and loan loss provisions started to decline.

Most importantly, credit started flowing to the private sector and to households once again. Analysts seeking to explain the difference between Spain and Italy in terms of recent economic performance usually cite credit flow and the banking system as key factors.

“The banking issue was crucial, and it was the root of the crisis,” says Luis Garicano, a professor at the London School of Economics, and an adviser to Ciudadanos, the centrist Spanish party. “If you don’t restructure the financial system, as Spain and Ireland did after the crisis, it is very difficult to have a real recovery.”

Away from hard economics, there are other signs of change in Spain. Recent election results show that voters are less tolerant of political corruption, and more reluctant to hand the country’s establishment parties the huge majorities they were accustomed to. Spain has a minority government at the national level, forced to build consensus even for marginal issues. Elsewhere, the PP and the Socialists have had to take on coalition partners, limiting the scope for abuses of power. Some of the country’s darkest corruption black spots, such as Valencia, are under new management.

Political rhetoric has changed accordingly, as have priorities. Before the bust, the talk among Valencia’s leading politicians was all about “putting the city on the map”. Today, regional ministers speak in low-key terms about the need to strengthen the industrial base, and ways to help small and medium-sized companies tap into foreign markets and access new technologies.

Some believe the changes go even deeper. Sandra Gómez, a 31-year-old Socialist who became deputy mayor of Valencia two years ago, argues that her generation has learnt a bitter lesson. Too young to carry any blame for the bubble, but not young enough to escape the bust, young Spaniards have been the big losers of the lost decade.