It may have been an unusual choice during this somewhat unseasonal weather, but living just within a stone’s throw from Taberna del Alabardero restaurant, I decided to pop in for a quick drink (purely to get out of the cold, of course!) with my dear friend Lynda Woodin. This one drink turned into a blissful afternoon departing once the sun went down.

I was unaware that this typically Spanish Tavern laid out a sumptuous buffet, only available on a Friday for only €17.50 per head for three courses (not to be confused with the daily €7.50 offer). Feeling a little shame-faced, I remembered the many happy occasions meeting my friends and spending afternoons sipping cool rose wine, dipping in and out of their secluded swimming pool.

The buffet was impressive and featured a selection of fabulous Andalusian dishes. Mainly comprising seafood, the menu was abundant in local flavor and the house specialty being paella served on a cast iron platter, was a lot for the eye to behold as it was carried passed us on the way to a neighbouring table.  It was clear that the chefs were highly proficient in their preparation and delivery of all menu selections, so we took our seats at a table facing the sea and settled in for our culinary afternoon. The Manager Miguel Contreras, who I had known for a long time welcomed us and suggested a couple of wines from the menu. Lynda ordered a bottle of crisp white – a Mediterranean grape from Cataluna, which was exceptionally light and a perfect choice to drink with our food selections from the buffet. 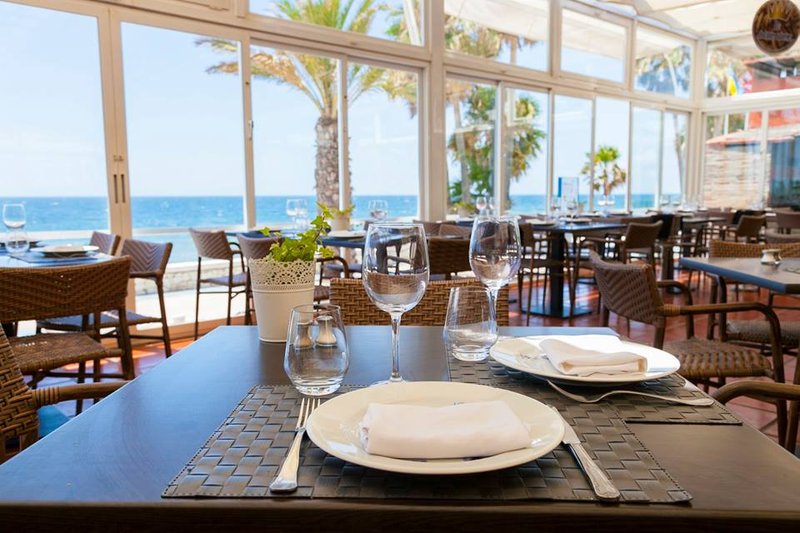 Lynda being a ‘Bon Viveur’, felt the buffet was simply delicious and with a particularly large choice of fresh fish, paella and crustacean made it difficult to choose what to have.   As an ‘Amuse Bouche’, which was an unexpected surprise, we were given a complimentary plate of fresh prawns to accompany our first drinks.  There followed a range of three starters including Boquerón’s (Anchovies), a wonderfully fresh tomato, onion and tuna salad and a ratatouille dish with a fried egg on top; all absolutely delicious and traditional to this part of Spain. 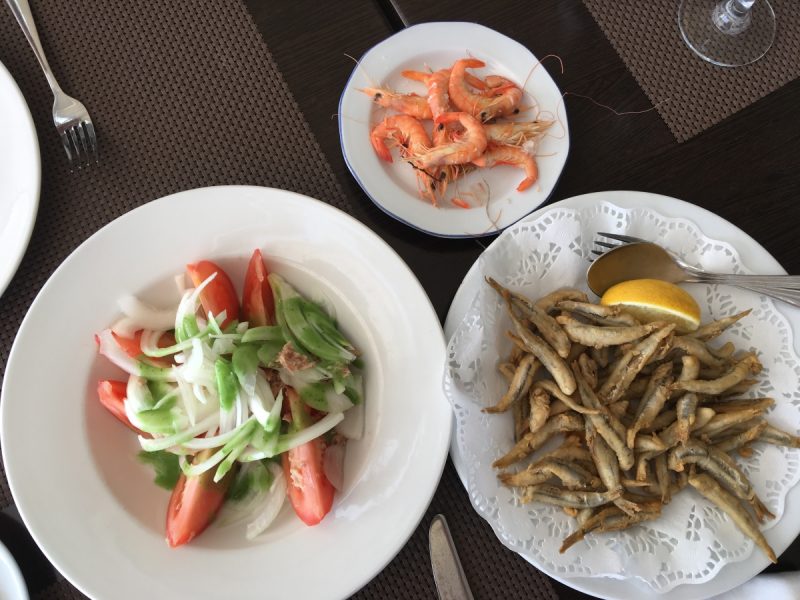 We then went up to help ourselves to their range of paellas – surprisingly as much as one can consume and six from which to choose.   Miguel suggested that we should have two or three spoonful’s of each, with a generous squeeze of fresh lemon and some traditional aioli sauce.  The staff were attentive and helpful, always ready to advise about the different courses and what delights lay within. On being presented with the bill, we were very surprised to see how incredibly priced it was for an exceptional lunch”.

I have to say, not having a great appetite, I astounded myself by returning to the buffet four times.  It was irresistible and the six paella dishes suited all tastes and palates, even the children were diving into large plates and returning to the buffet.  Selections included shelled prawns and diced fish, black squid ink paella with baby octopus and squid bull tails, baby beans and wild mushrooms and vegetable paella. 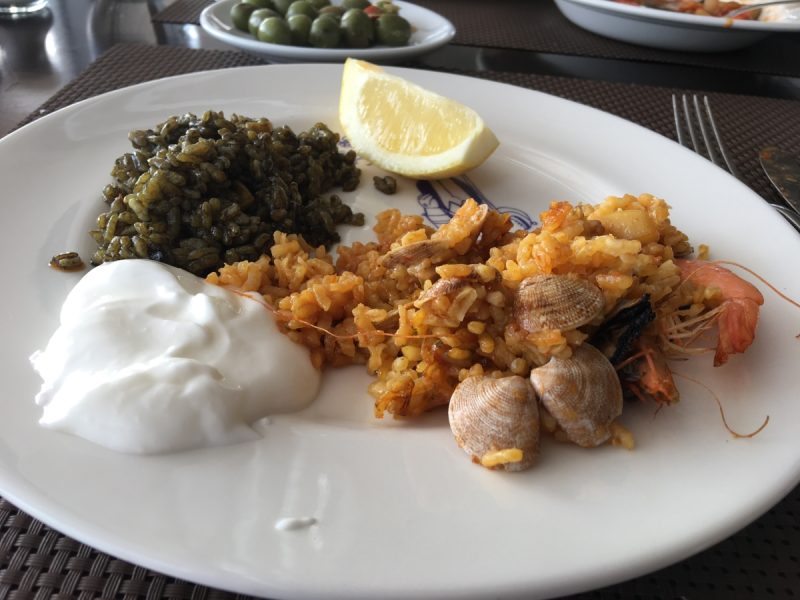 In addition, fish and seafood with wet rice, rice with large red ‘scarlet’ prawns and for those who prefer an alternative to rice small noodles with King Prawns and local clams. ‘Truly sensational’. 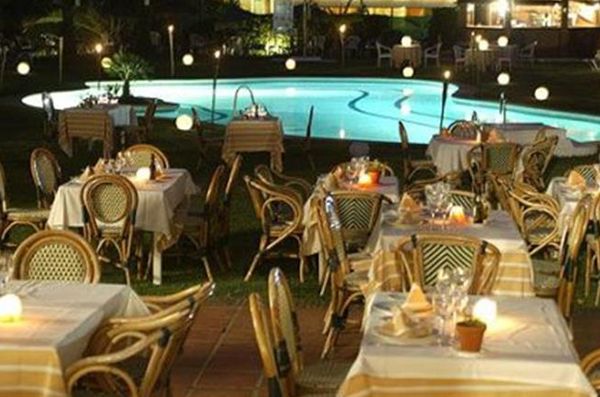 Should clientele wish to opt for the A la Carte menu, it is extensive with over twenty starters including Carpaccio, fish and seafood soup, garlic King prawns with garlic bread, marinated tuna fish with Wasabi Mayonnaise and crackers cookies with main courses from traditional fish and chips. Other dishes featured are grilled sea bass, turbot and cod. For meat lovers, beef tenderloin “Solomillo de Buey’, a particular favourite of mine (if I had not had so much paella!) lamb chops or cheek of Iberian pork.

Spaniards are quite often happy to give a local drink on the house and in this instance Miguel gave us some Magno  cognac which is a favourite of Lynda’s husband James and for us Pachiran or lemonchello, one of my all-time favourites, a ‘Sorbetto’ (fruit flavoured sorbet with Vodka). I opted for the lemon and Lynda had the mango. A lovely end to a fabulous lunchtime treat. 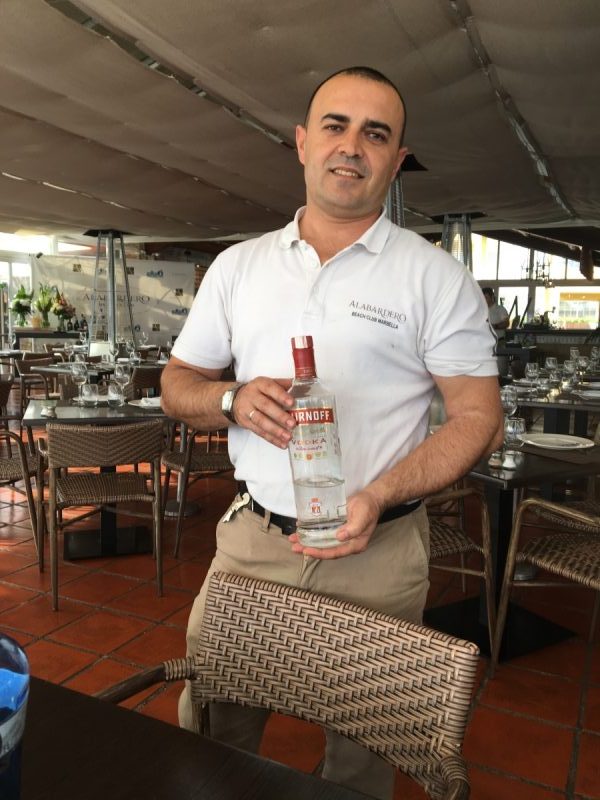 Taberna del Alabardero is not only heavily patronized by Spanish locals which always defines a great  restaurant  in their homeland, but also by an international crowd including French, Scandinavian and the British expat community.  The restaurant is not only established nationally with sister restaurants in Madrid, Marbella, Seville and Malaga, but also globally in Washington DC, where the establishment has been awarded accolades for their outstanding cuisine, two years in a row.

Without a shadow of a doubt, I will be making Taberna del Alabardero a very regular lunchtime venue. I am only surprised that I hadn’t realised the food, the service, the ambience and the unbelievable cost for such lovely food, lay only a short distance from my doorstep. 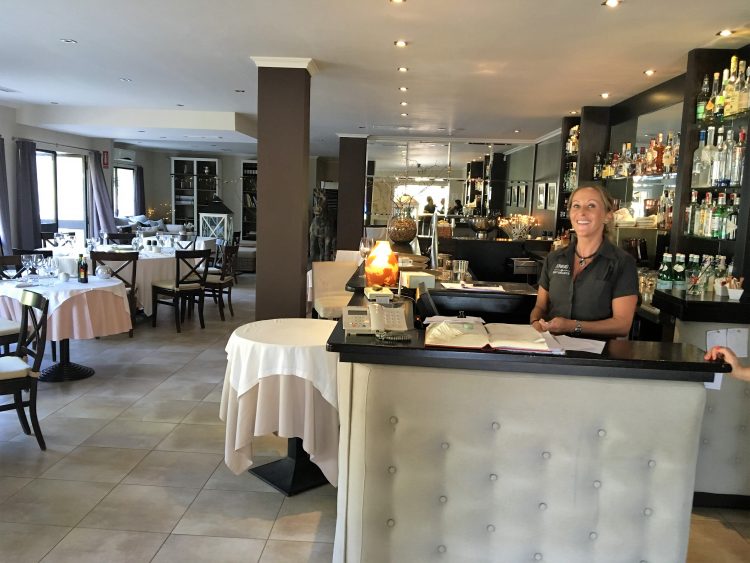 CONRAD’S IL RISTORANTE – ‘THE ITALIAN PLACE WITH A DIFFERENCE’