Narrowing down the best festivals in Spain can be challenging, but we’ve chosen a few of the exciting events that take place annually in Spain, the country of fiestas and festivals! Every village, no matter how small, has their own, unique celebrations. But which ones are not to be missed this year? Come and celebrate with us in Spain .

The carnival takes place before Samana Santa and is always a huge event on the island of Tenerife Its Colourful and rhythmic almost like Rio in Brazil. It is a huge street party the best in Spain, the celebrations in Tenerife and Cadiz take the crown.

In Tenerife, the carnival capital of Europe, they dedicate the entire month of February to carnival celebrations. The island is filled with fun, colour, glitter and glamour, and the numerous contests, parades and parties offer plenty of entertainment. It’s an event that attracts visitors from all over the world who are looking for an authentic carnival experience. 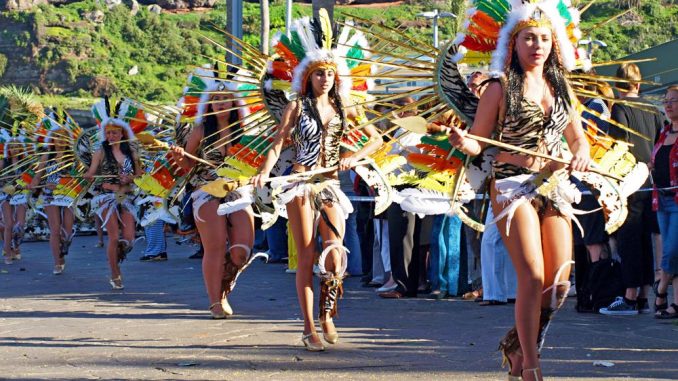 Imagine a carnival with an authentic Andalusian spirit, that’s the carnival of Cadiz, a party that converts the city into a place pulsing with music, energy and fun. Don’t miss out on this unique fiesta, celebrated every year in February. Cadiz has many other things to see while you are in the area as its where the early Venetians left for foreign lands over the seas .

The Fallas of Valencia

This is an explosive party which takes place in Valencia city! No other place of the world do they celebrate an event that is more fascinating than the Fallas, which has actually been declared an event of Intangible Cultural Heritage of Humanity by UNESCO.

For an entire week, gigantic, colourful statues and figures fill the city’s squares and streets. They are often satirical and reference political or pop-culture events that happened throughout the year. They are all very impressive. Walking the Fallas route is one of the most interesting ways to discover the city. 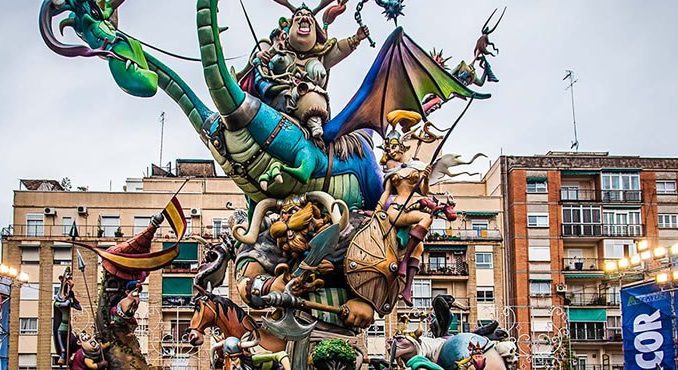 Every day at 2 pm, you can enjoy spectacular shows with music and fireworks, but the real highlight of the festival is the last night, when the statues are burnt during a light show. Holidays in Valencia wouldn’t be complete without a visit to the City of Arts and Sciences, which marks its 20th anniversay in 2018.

Ever felt like throwing a tomato at someone? At the Tomatina in Buñol you can! This crazy tradition started 70 years ago, and now on every last Wednesday of August, thousands of people throw tomatoes at each other during the funnest event of the year.

La Tomatina is actually part of a larger celebration; it marks the end of an entire week of parades, parties, fairs and street markets. It is so original and so fun that people visit Spain just to take part in it. The number of participants is limited to 20,000, which seems a lot but tickets are sold out in a flash. So if you want to go crazy in Buñol, make sure to get your tickets well in advance! Contact your nearest travel agent. 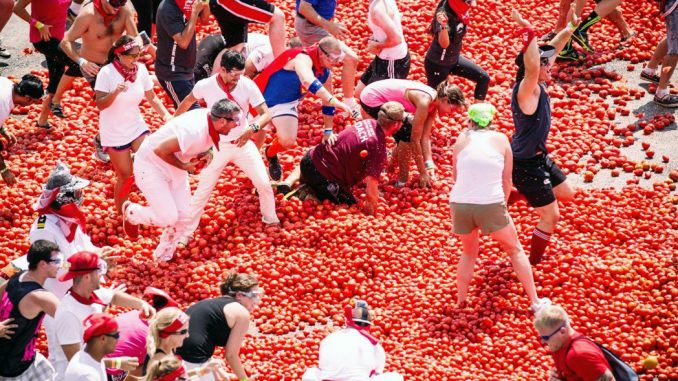 Another crazy tradition of Buñol: during the festivities, a slippery pole with a smoked ham on top is placed in the main square. Whoever gets there first wins the ham. Are you up for that challenge? It’s all a bit of fun and not for the faint hearted!

This is a very popular event many people come to the southern part of Spain only for this event. May is the month of Cordoba and the Cordoba Patios Festival is the cherry on the cake for all those who choose to spend a few days in this city. The festival takes place every year at the beginning of May. During this time the owners of the most beautiful patios that are normally closed, open up their courtyards for the public to visit. 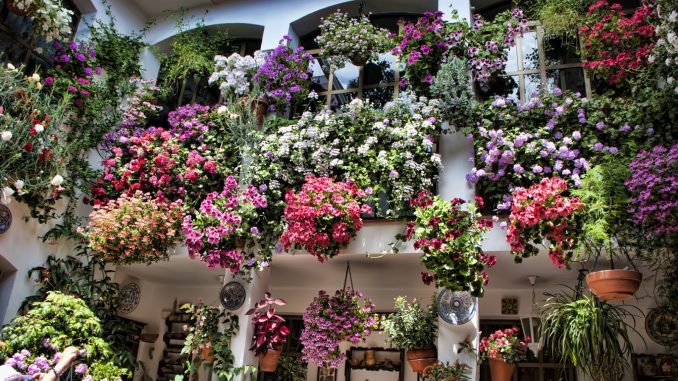 The festival brings joy, music and huge amount of tourists to Cordoba, who want to participate in this amazing colourful fair. It’s not just plant lovers that will enjoy their time in this city, Cordoba is known for its great food, very interesting history and numerous places where you can feel the traditional Andalusian atmosphere. Its usually getting warm then,. Don’t forget to buy their olive oils which are some of the best in the world.

One of the most amazing events taking place in 2018 is without a doubt the wonderful Feria de Abril which starts on the 14th of April. The fair starts with the traditional lighting of the entrance to the fair grounds at midnight, and for the following week the city is filled with entertainment, colours, and the best of Andalusian art such as flamenco the dresses and the horses are a spectical. 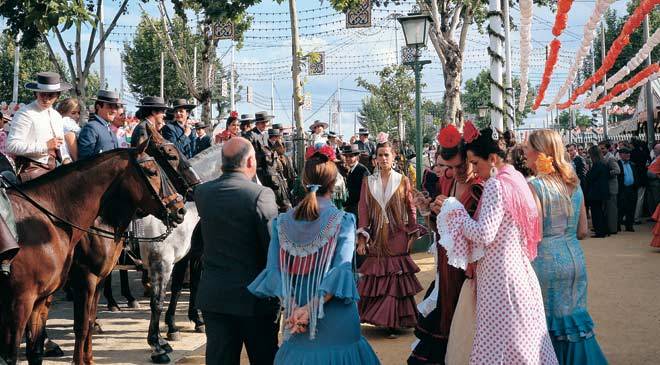 Apart from the fair and all the entertainment, it’s the best period of the year to explore Seville itself. The entire city is drenched in an authentic Spanish, festive atmosphere. When the night falls, you can go out and enjoy the spontaneous flamenco performances that pop up on every street corner. It’s an experience that can’t be described with words, you have to live it to know what it’s like!

The Feria del Caballo in Jerez

The Feria del Caballo is a wonderful place to be to taste the sherries and see the horses of Spain. What else can you expect during the Feria del Caballo (the Horse Fair) in Jerez? Joyous celebrations, flamenco performances, the best of Andalusian gastronomy and of course: lots and lots of horses!

This small city comes alive for a week in May, it becomes a feast for the senses. The festivities start with the lighting of the grand entrance to the fair. There are parades with horses and markets with over 250 stalls, each serving the most delicious tapas. Go for a stroll and enjoy one of many flamenco performances. 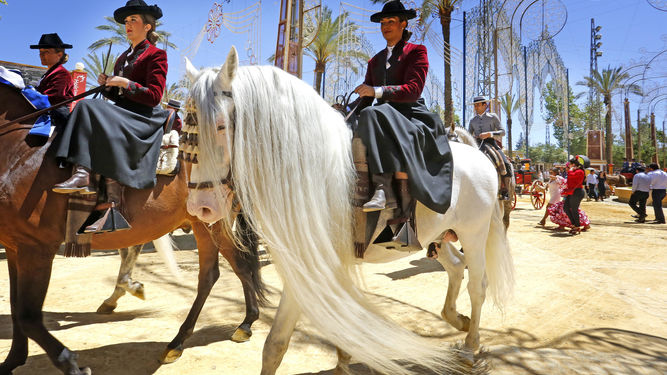 Everyone dresses up for the occasion. Women wear the typical flamenco dress and men wear traditional suits called trajes cortos. But in the end, the most important thing is to go out and enjoy this cultural tradition to the fullest.

The August Fair in Malaga

My Favourite fair as it takes place in the old city during the day lots of flamenco dancing and many bars open for fun !and in the Ferrier ground at night The feria de noche (fair during the night) takes place just outside the city, with attractions, food stalls and dance tents. The August Fair of Malaga is an entire week full of fun activities and events at the heart of the Costa del Sol. It’s the best place and time of year to relax and enjoy a great holiday. 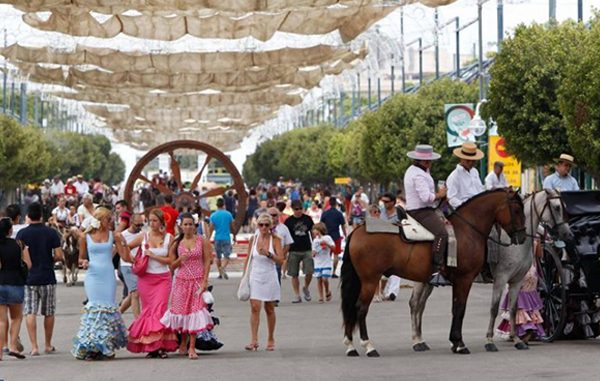 During summer, every neighbourhood of Barcelona celebrates its own typical parties, but none are as special, fun and creative as the Fiestas de Gracia in August.

The emblematic Gracia neighbourhood is transformed into a spectacular place, filled with art and colour. Its streets compete with each other to win first price for the best and most extravagant decoration, while offering visitors and passers-by a truly magnificent scenery. With every corner you turn you will be transported to a different world. 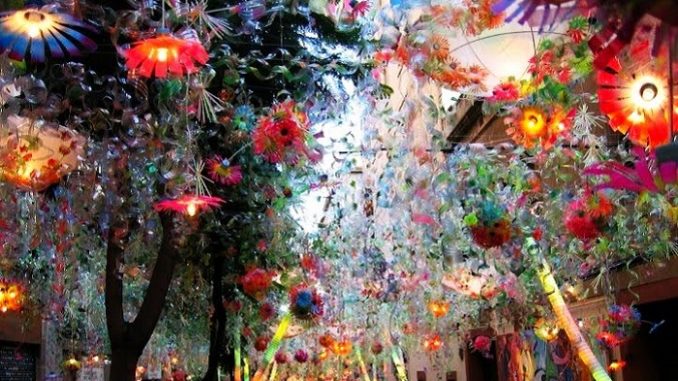 And if the decoration on its own is not enough, at the Fiestas de Gracia you can also enjoy street acrobats, correfocs (a fireworks spectacle), exhibitions, parades, street markets… And at night the fun continues with the many concerts that are held at the squares of Gracia.

There is one night in Spain that is very special to everyone: the night of June 23rd, Saint John’s Eve. It marks the start of summer, and it’s celebrated at the beach with bonfires and fireworks.

It’s a magical night filled with old customs and superstition. Many people will jump over the fires and in the waves at midnight, believing it will bring them good luck. In some parts of Spain, like Galicia, food is also an important element, especially sardines cooked in the ashes of the bonfires. In other places like Barcelona and Valencia, everyone will be looking for a vantage point to have a good view of the spectacular fireworks shows at midnight. 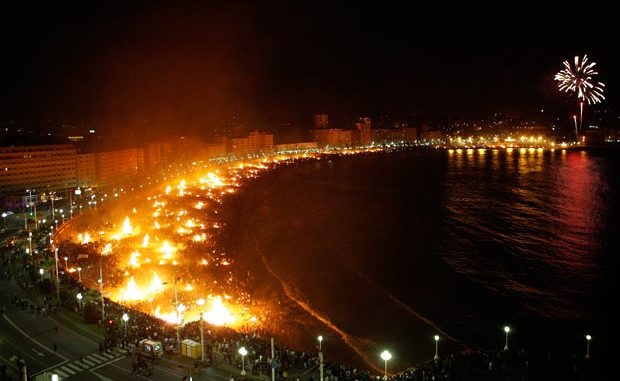 Imagine running as fast as you can while trying to escape a giant ball of 3 metres in diameter with a weight of more than 150 kg… That is what happens every August in Mataelpino, a village in the Sierra de Guadarrama. The village decided to replace the traditional encierro (running with bulls) with this boloencierro, where the protagonist is a big, plastic ball. 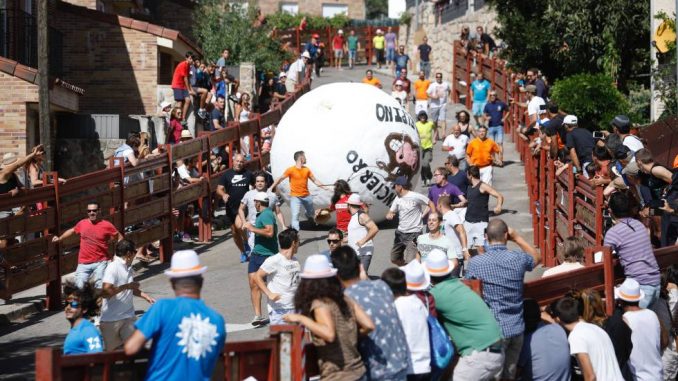 Even children can enjoy their own mini boloencierro, with smaller and lighter balls that are painted in bright colours to make them more visible. Are you ready to get an adrenaline rush?

On every 29th of June, early in the morning more than 10,000 people gather in the main square of Haro (La Rioja) for the coolest event of the town: the wine battle!

The uniform for the battle is the typical clothes of La Rioja, white shirt and trousers with a red handkerchief tied around the neck. But when the rocket that marks the start of the battle is fired, there won’t be anyone who can keep their clothes clean! Wine is thrown everywhere and the entire town is coloured red. 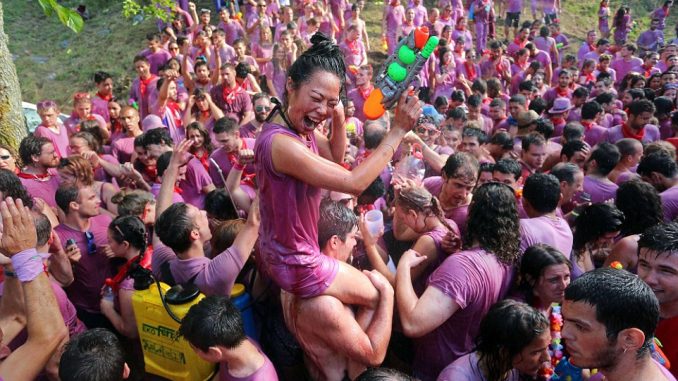 There are 40,000 litres of wine reserved for the festival, and until every single drop has been thrown the band doesn’t stop playing. Fun is guaranteed at this messy, hilarious event! The tapas are to die for who needs a proper meal when you are enjoying such a fair !

The Semana Grande of Bilbao

Going to Bilbao is always a good idea. The city is thriving, constantly changing and becoming for appealing for those who’d like to get to know the less sunny side of Spain. The Academy of Urbanism just awarded Bilbao the 2018 European City of the Year, but it’s just one of the reasons why choosing this city will ensure an unforgettable holiday.

In the middle of August, Bilbao gets ready for its most important event of the year, the Aste Nagusis or Semana Grande. This festival lasts for 9 days, with concerts, fairs, theatre performances and plenty of other entertainment taking place all over the city. One of the highlights are the fireworks competitions that illuminate the sky every night. 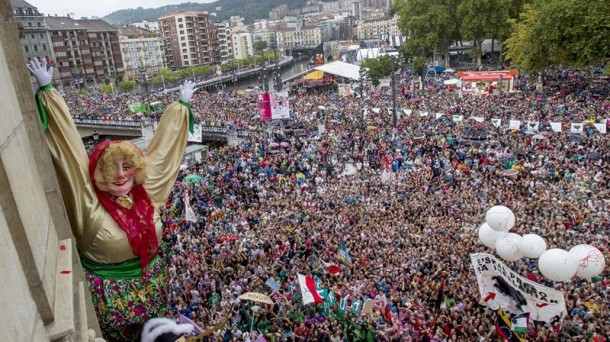 The last day of the festival, there won’t be any fireworks. The closing ceremony takes centre stage instead, when la Marijaia (the mascot of the Semana Grande) floats downriver on a boat and is set on fire, only to return when the next edition takes place.

Spain has festivals for all preferences, from solemn rituals to wacky celebrations! And the more serious religious events taking place all year in every village!

Many of the Ferrier weeks still do have bull fighting during their Ferrier week, but check the websites as many also don’t do them any longer!