This new museum, which opened in 2009, has around 700 pieces of glass, dating from Phoenician times to the 20the century. The museum is housed in an 18th-century casa palacio in the centre of Malaga, with spacious patios and gardens, is furnished like a private home, with antique sofas, rugs, mirrors and paintings, and cabinets for the glass. Owner Gonzalo Fernandez-Prieto has, in effect, created a decorative arts museum with an intimate atmosphere; it is still relatively unknown, compared to the larger Picasso and Thyssen museums. 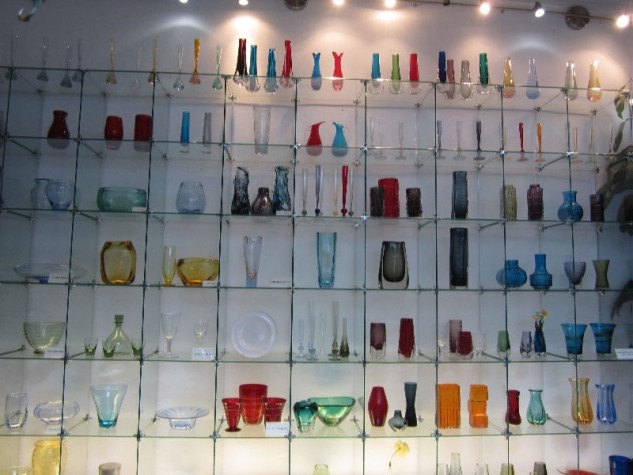 The collection is divided into various historical eras, across two floors, with period furniture from each era to complement the glass. On the ground floor, you can see English Pre-Raphaelite stained glass windows. The first floor has several sections, starting with the Ancient Civilisations – Egyptian, Phoenician, GrecoRoman, Byzantine and Islamic – look out for the pretty, brightly-coloured Phoenician pieces, dating from the 6th century BC.

Then we jump forward by about 1500 years: from the 16th and 17th centuries, you can see Catalan, Venetian, Dutch and Bohemian lead glass; the 18th century has glass made in La Granja; the19th century, English cameo glass by Thomas Webb; and the 20th century, bold Lalique and Whitefriars.

One of several new museums in Malaga – it opened in 2010 – this museum houses the private collection of Portuguese car fanatic Joao Magalhaes. The collection is worth around 25 million euros, and is one of the most important vintage car collections in the world.

This museum is housed in one of Malaga´s most architecturally stunning buildings – the old tobacco factory (Fabrica de Tabacos). Constructed in 1927, it has been carefully transformed to house a collection of more than 80 vintage and modern cars, alongside fashionable travel memorabilia from the 20s, 30s 40s and 50s to keep non-car fans happy.

The first car in the exhibition is so old it looks more like a horse-drawn carriage, without the horse, but with a little motor instead. From here we are led through 10 areas dedicated to various eras and themes, such as Belle Epoque, Art Deco 30s, Dolce Vita 50s and English Tradition, plus the more contemporary Alternative Energies, including a solar-powered model, and Tuning.

As well as cars with flames painted along the sides and super-powerful sound systems, Tuning (or pimping, as it’s known in the US) features a genuine “jetset car”: a black Rolls-Royce customised with Swarovski crystals. Bling! The museum also hosts fine examples of Bugatti, Auburn, Bentley, Jaguar, Ferrari and Mercedes – you can admire a host of collectibles from a bygone age.

3. The Alcazaba of Malaga

This fortress palace, whose name in Arabic means citadel, is one of the city’s historical monuments and is much visited because of its history and beauty.

The building that dates from the Muslim period is located at the foot of the Gibralfaro hill, crowned by the Arab defence works to which the Alcazaba is connected by a walled passage known as the Coracha. With the Roman Theatre and the Aduana Customs Building, this special corner offers the chance to observe Roman, Arab and Renaissance culture, all within a few yards of each other. 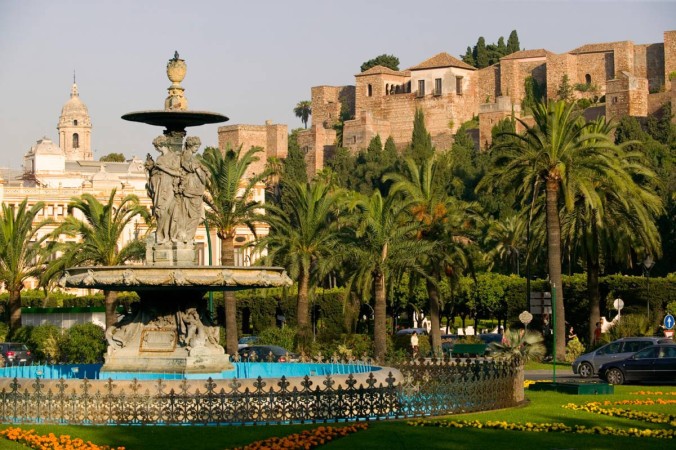 According to Arab historians, it was built between 1057 and 1063 at the instructions of Badis, King of the Berber Taifa of Granada. Transported material was used in its construction and columns, capitals and other materials were taken from the nearby Roman Theatre.

The Almoravids in 1092 and the Almohads in 1146 reached Málaga. In 1279 the city was conquered by Muhammed II Ben al-Ahmar and became part of the Nasrid kingdom. The renovation of the building on its rocky base gave it a markedly Nasrid appearance. It combines its defensive purpose with the beauty characteristic of an Arab palace and is organised around rectangular patios and spaces around gardens and pools. According to the traditional architectural tenets of Granada, the rooms attempt to combine the play of light and shade that the Arab master builders achieved so well.

The port is conveniently located near the city centre, within easy walking distance to all of Malaga’s cultural and historical highlights.

One of the city’s biggest parks is right across the road (for a video of the Parque de Malaga), as is the Alcazaba, the Gibralfaro castle and its just a short walk to Malaga’s historic centre and the main shopping areas – including Calle Larios.   A visit to all is easily doable in a few hours. For cruise ship passengers, the location is ideal, you can be in the heart of Malaga within five minutes.

Over the last ten years, there have been two projects aimed specifically at Malaga’s port and the surrounding areas. An expansion plan and the city-port plan. The expansion plan is ongoing and has so far opened up 11 docks as shipping and cruise ship terminals. There are now over 700,000 passengers arriving on Malaga’s shores from 220 different cruise liners. This number has been growing rapidly over the last few years. Malaga’s port is now one of the most important in Spain

Muelle Uno was opened at the end of 2011. The 14,000m2 shopping and commerce centre is home to restaurants, shops and has underground parking for over 1000 cars. The most exclusive part of the port, it is home to Malaga’s only Michelin-starred restaurant (Jose Carlos Garcia’s) and has a marina for luxurious yachts, known as “Ricardo Gross.”

Despite its exclusivity, there are also numerous other cafés and bars that cater for all tastes and budgets (including an Indian restaurant).

Malaga´s cathedral was built between 1528 and 1782 on or near the site of a former mosque. While original plans had allowed for two towers, both lack of funds those donated to American Independence resulted in the completion of only one, giving rise to the name by which the cathedral is affectionately referred to, La Manquita, loosely interpreted as “one armed woman”.

The interior has influences of the Renaissance and baroquestyles. The notable 17th century choir stalls of mahogany and cedarwood were designed by Luis Ortiz. 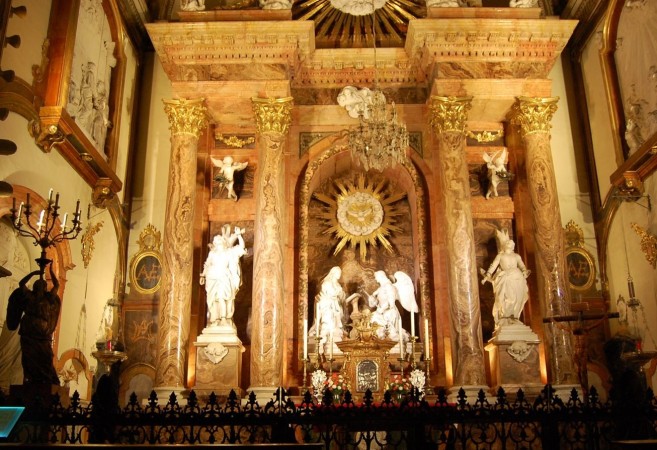 After his death the 40 finely carved statues of the saints behind each stall were completed by Pedro de Mena, one of Spain’s most celebrated wood-carvers of the time, who spent some years in Malaga. Some of the chapels leading off the aisles also contain works by Pedro de Mena and his tutor, Alonso Cano.

Adjoining the cathedral is the Iglesia del Sagrano. Founded in the 15th century on the site of a mosque, the church has an unusual rectangular shape, its Isabelline-Gothic portal is the only remaining part of the original structure which was rebuilt in 1714. The interior is richly decorated and its main altar features a magnificent 16th century retable.

This Castle, built in the 14th. Century to house troops and protect the Alcazaba, is today one of the most visited monuments in Málaga. From its walls, visitors get spectacular views of the city and you can visit the Interpretation Centre to discover the site’s history.

It was named after a lighthouse at its peak (Jabal-Faruk, the light mountain). Although it was used by the Phoenicians and Romans, in 1340 the Nasrid King Yusuf I made the place into a fortress. 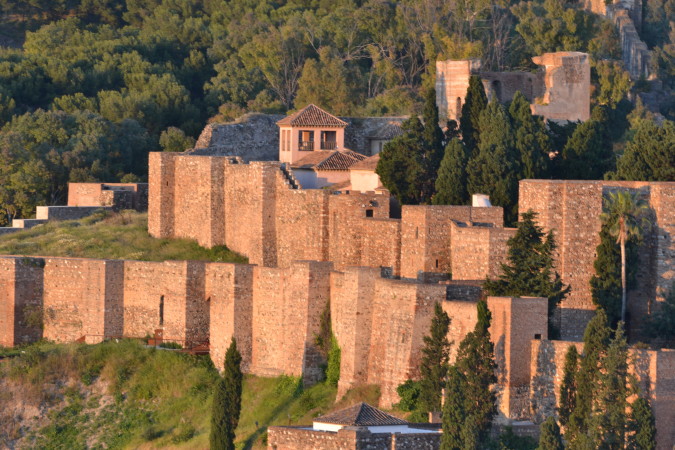 During the reconquest (i.e. the Reconquista) it was besieged by the Catholic Monarchs in the summer of 1487 and Ferdinand the Catholic made it his temporary residence after the victory. In addition, he designated the castle as a symbol on the coat of arms of the city.

It was considered the most impregnable fortress on the Iberian peninsula for a time. It has two lines of walls and eight towers. The outer wall meets the coracha, zigzagging walls arranged to link to the Alcazaba Castle. Inside you can walk around the whole perimeter of the fortress.

The market building has undergone a refurbishment after being closed for a number of years. If you enter the market with you eyes at street level, they will certainly raise to gaze in marvel at the stained glass window opposite fit for any cathedral. 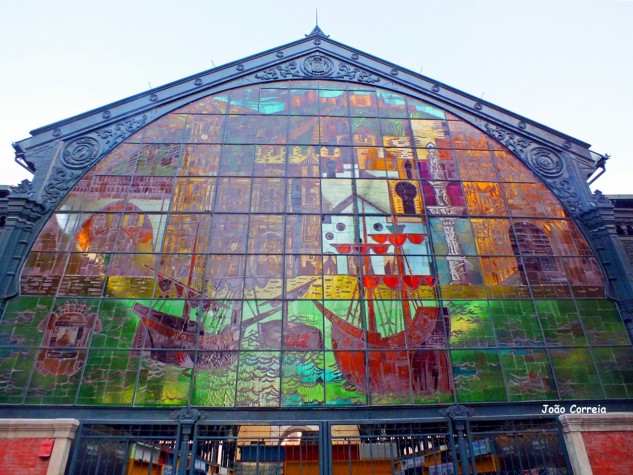 Fish, meat, cheese, and fruit and vegetables: all fantastically fresh and at the best prices. The fish section in particular is a visual and olfactory feast. Definitely the place to come if you want to impress dinner guests with giant prawn and lobster-like creatures or if you’re thinking of making a twenty-person paella!

A great place to have lunch after you’ve bought up half the Mediterranean is in “El Bar de los Pueblos”, opposite the market to the left as you face the main entrance. It’s a prawn-head on the floor sort of place, where white-shirted waiters shout and barge their way round with authority. Good, filling menus and very cheap tapas and raciones.

This park is designed as a landscape, with curved lines that frame and define islands of different sizes, making you forget that you are in a rectangular space. Inside the park there are various attractive spots: different kiosks and stands, such as the bandstand; and several fountains, like the one in La Cascada garden, which is a beautiful Renaissance fountain commissioned by Charles V, called the Fountain of Swans or of Genoa.

There are also numerous statues around the garden, many of them dedicated to illustrious figures from Malaga, such as painter Ferrándiz, poet Salvador Rueda, Narciso Díaz de Escovar, Rubén Darío and Arturo Reyes. There also used to be a statue of Cánovas del Castillo, but it was moved to the avenue of the same name. The existing vegetation perfectly complements this free and natural layout.

Around the year 1855, Jorge Loring and Amalia Heredia purchased some ranches situated to the north of Malaga where there were previously olive, almond and citrus fruit trees. Their plans began during a honeymoon, and due to their high purchasing power and their relation with European gardens, they brought back exotic plants from different countries all over the world.

In the year 1911 the botanical garden was purchased by a family from Bilbao who continued expanding it until finally in the year 1990 it was purchased by the town hall of Malaga who divided it into 2 parts to build the Limonero reservoir. After a few construction works it was open to the public again in 1994 as a historical botanical garden and cultural, didactic and scientific centre. 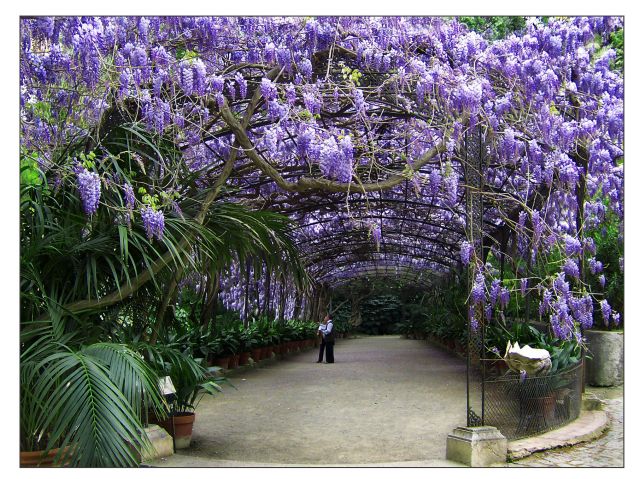 The garden of the Conception was, back in the day, a meeting centre of illustrious personalities, around the 19th century it gathered politicians, artists and the nobility of Malaga who frequented and enjoyed this garden, something that contributed to the construction of one of its buildings like the Palace-House, the house of the Cyprus trees, 2 greenhouses, bridges, a viewpoint and the Loringian Museum where they exhibited the archaeological remains found in Malaga with excavations financed by the Loring family.

Located in an area known as Soho de Málaga, on the banks of the normally dry Guadalmedina river, is the Centro de Arte Contemporáneo. This exciting modern art museum is housed in the former wholesale market building which has a vast warehouse space of some 2,400 meters. The CAC Málaga was officially opened on 17 February 2003 by her Royal Highness Infanta Cristina and in its first decade has established itself as one of the most important contemporary art museums in Europe.

The museum has a permanent collection comprising around 400 works which have been loaned by private collectors for periods of between three and five years. This is particularly notable for its works created between the 1950s and the present day with an emphasis on North American artists of the 1960s such as Lichtenstein and Stella. There is also a regular program of temporary exhibitions dedicated to up-and-coming Spanish artists.