What would Spain be without bullfighting? Bereft of its finest cultural tradition, say supporters of the tradition known as “la lidia”.

A normal 21st-Century European nation, argue those in favour of banning bullfights.

Spain is today a divided country over what is probably its most famous tradition to the rest of the world, alongside flamenco music.

Fans say la lidia remains part of Spain’s national fabric, although the number of bullfights is dropping. They are toasting a constitutional court ruling last month that declared bullfighting part of Spain’s “national heritage”, thus overturning a ban imposed by the region of Catalonia.

But animal rights campaigners believe they have the wind in their sails due to the prohibition of some bull-baiting festivals and the fact that several cities and regions are considering local bans despite the Catalan setback.

Where did it all start?

Bullfighting in some form or other has existed in Spain since at least Roman times, and the most typical current format involving a matador with a cape and sword took its definitive shape in the 18th Century.

“It’s a cultural tradition. As something for which I risk my life for on a regular basis, it demands respect and bullfighting is going through a crucial time,” says Juan Diego Vicente, current president of Spain’s Bullfighters’ Union (UT). 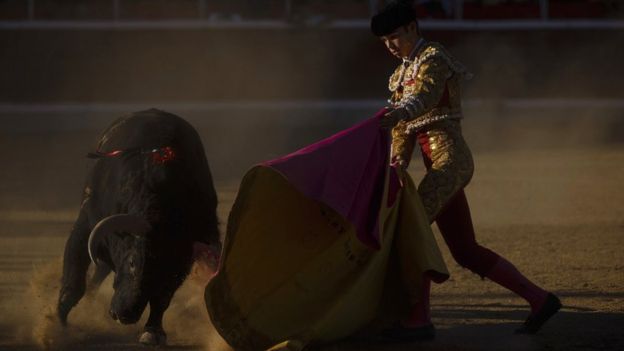 “It’s a festival, a sacrificial ritual, a spectacle and a business. It’s complex and riven with contradictions,” explains Andres De Miguel, a journalist and writer from Madrid.

“You go to a bullfight in the hope of seeing beauty and those rare moments when the bullfighter attains the elevated state of an artist, but one who puts his life on the line for the spectacle.”

Is bullfighting really on the way out?

According to government figures, only 9.5% of Spaniards went to a bullfighting event, either professional or amateur, in 2015.

“We are convinced that bullfighting is literally dying on its feet, and the prohibition that was achieved in Catalonia will become a reality in the rest of Spain,” argues Silvia Barquero, leader of Pacma, the country’s leading animal rights party.

Pacma attracted over a million votes in Spain’s general election in June, although it failed to win any seats.

But professional events were only down by 30% in the same eight-year period, which covers Spain’s deep economic crisis and slow recovery.

How cruel is it?

“Society has undergone a fundamental change. Spaniards no longer identify with bullfights, but, on the contrary, they consider them to be grave cases of animal abuse,” argues Ms Barquero.

But there is no compelling evidence that a majority of Spaniards want to ban bullfighting. Polling on the subject is infrequent, with most surveys that are undertaken bearing out a 2010 Metroscopia poll for El Pais newspaper in which 60% said they did not like bullfighting, but only 42% would impose a ban.

Bullfighter Juan Diego Vicente disputes the idea that his art is cruel.

He stresses that fighting bulls live unmolested in harmony with their natural surroundings until they can be fought at the age of four. Many of those who want to ban the spectacle “keep birds in cages and dogs in tiny apartments, cutting their tails and nails and curbing their animal identity”, he claims.

How dangerous is bullfighting?

“None of us fans wants the bull to suffer; we want a quick death with a fine ‘estocada’ [final thrust of the sword],” says Andrew Moore, an Englishman resident in Madrid who has been converted to bullfighting.

However, he accepts bullfighting could be made more humane, by using an electric prong instead of a dagger to finish off a defeated bull when the sword has not worked correctly.

Then there is the fighting of calves, young bulls often under a year old, which have no long horns to keep amateur and child bullfighters at bay, an activity frequently denounced by Pacma.

A world away from the lithe movements of a matador and the banderillero, who sinks barbed sticks into the sprinting bull’s shoulders, millions of Spaniards take part in rowdy bull-running events such as Pamplona’s world-famous San Fermin festival.

Such activities have largely escaped efforts to protect bulls from possible mistreatment.

The 2010 Catalan ban on bullfighting allowed for the continuation of local running festivals -“correbous” – including a typical Catalan variant in which the animals have flaming torches attached to their horns.

Pacma has also called for a ban on events such as the “bous a la mar” festival in Denia on the Costa Blanca, where bulls are baited on the harbour wall until they leap into the Mediterranean.

Who else holds bullfights?

The battle for the future of bullfighting extends far beyond Spain.

There have been animal rights protests in Colombia, Peru and Mexico. And last month the mayors of France’s six bullfighting towns complained to the national government about pressure from campaigners. 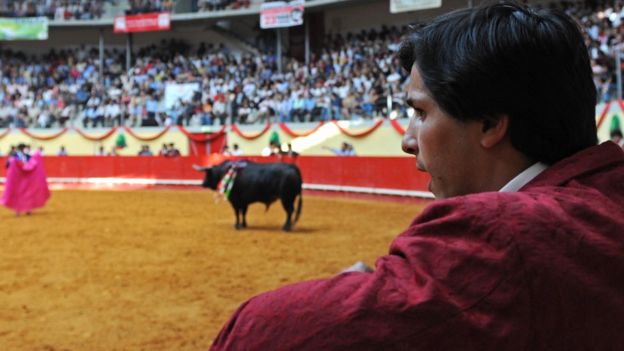 Bullfight supporters particularly object to outside pressure, from groups such as the UK’s Peta and Humane Society International (HSI).

Joanna Swabe of HSI/Europe argues that “taunting and killing bulls for entertainment is a brutal anachronism [which] deeply tarnishes the modern image that Spain wishes to promote”.

With Spain so divided over bullfighting, neighbouring Portugal may have hit on a non-lethal answer to the problem.

There, a mounted bullfighter uses horsemanship skills to plant “bandarilhas” which only wound the animal’s shoulders before a group of men wrestle the bull to a standstill.

In Portugal the bull survives. In Spain it is bullfighting itself that faces extinction.